Galileo Be Damned. As far as I'm concerned, THIS is the center of the universe.

Afterwards I described it to a friend as "I am white-girl excited right now."

I saw Colin Quinn walking in, and I did my best impression of a person who didn't even care. 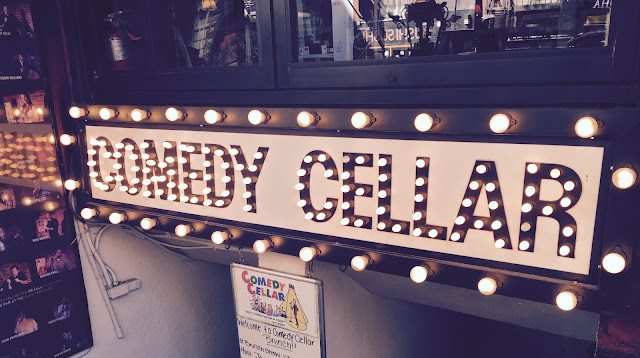 Last night, I saw my first performance at the Comedy Cellar on MacDougal Street in NYC. And it was actually everything I hoped it would be. Here was the lineup:

And, you guys. Not a single one of these motherfuckers was bad. Like, legit funny. Crowdwork, observation, act-out, joke structure. It was crazy. I'm sitting here trying to pick a stand out, and I legitimately can't. Each comedian had such a distinct voice, such well crafted material, and such an ease with the audience.

If you want some new comedy to listen to, any of these comedians would be a great choice. Maybe start with Greer Barnes, though. He opened for Louis at Madison Square Garden, and he was pretty freakin' great.

I told myself I would leave with at least one "walk away" lesson, so here we are:

1) It's time to start transitioning from this One Liner shit. I'm doing a lot of jokey jokes right now, just so  I can learn the form, and get some actual feedback from these brutal open mic audiences. But watching these folks onstage, it's clear that what stand up is is a different form. I'm not quite sure how to elaborate. Maybe a future blog post.

2) Crowd work is so essential. All of them did at least some kind of crowd work ("Are you guys dating? Where you from? etc). What was crazy was to see how they reacted when they asked the same people the same questions as previous comedians, and how they would know without asking just based on crowd reaction. Incredible.

3) This is what I want to do. That's a thought I had, verbatim, watching Phil Hanley perform, and then had again for every single comedian who went up. There is something so pure, and so silly, and so dedicated about this profession. It's what I want to do. Damn.

That's all for today folks! See you tomorrow!

Popular posts from this blog

"Here we are again" - tricking yourself into being good at Art

March 28, 2018
Here we are again. That's an old clowning phrase. Back in the OG days of European clowning, the French government briefly outlawed popular performance mediums. Professional, stuffy shit only for the French People. Rebellious clowns would announce their presence as they walked onto the street-stage by saying, "here we are again." To me, it's a lot like Waiting for Godot . It speaks to the eternal return of the idiotic. And that's how I feel a lot of the time when I'm writing. Today, I am tapping into the eternal return of the idiotic . Often times, you can trick yourself into writing something good by first writing something bad. Trick yourself into writing something creative by first writing something prescriptive. Trick yourself into competence by starting with idiocy. It applies to writing, but also to rehearsing. Also for any kind of improvising. Start with idiocy, advance to competence. Rinse and repeat for 10 years to get to mastery. I hope you li
Read more
June 28, 2017
What kind of things do you keep in your notebook? Are they the right things for creativity? I listened to an interview with awesome comic Jerrod Carmichael (check out his 2014 and 2017 specials on HBO, directed by Spike Lee and Bo Burnham respectively), and he had an interesting perspective on what he keeps in his journal. I'm paraphrasing, but essentially: instead of keeping joke ideas per se, he keeps an active but non-comprehensive log of the things he wants, thinks, feels, and experiences throughout the day. It's not punchlines and act-outs and dialogue. It's only little glimpses into the story of his life, as expressed through his thoughts, wants, feelings, and opinions. I think, for a standup comic, this may be a great way to go. Most comedians, in the modern sense, are coming to the stage bringing their perspective and emotional experience of the world. If you don't have some idea of what that actually is, it makes it real hard to bring it. Journaling in th
Read more
June 26, 2017
How to tell if you're an Amateur or a Professional: self-worth and time away from the Craft Heya folks! First off, sorry for going dark on you for a few days. It was a crazy little stretch for me living in New York: having experiences, composting, and generally taking some time to collect my thoughts on my progress in standup so far. I'm almost halfway through my time in New York (I'll have an official "halfway done!" post in a few days), but I wanted to take some time to evaluate my work so far, change course if necessary, and attack once again. I think most artists need time to compost. Even if your conscious mind isn't working on the craft, often times your subconscious mind is. Steven Pressfield offers two views of an artist: The Amateur and the Professional. The difference is more than just that one does it for love, and the other for money. In his view, an Amateur is an artist whose identity, personality, and day-to-day life is too intimately a
Read more